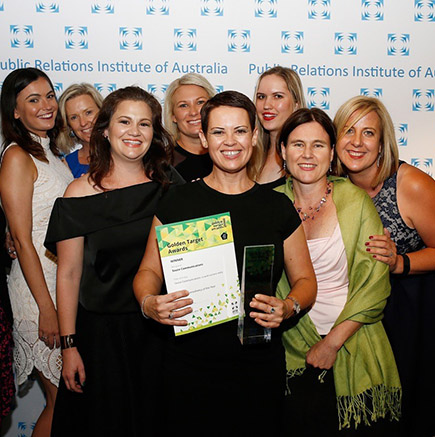 In addition, Sauce Account Executive Ariana Shutte was honoured as a national finalist in the 2016 Top sPRinter category, which recognises exceptional practitioners with 2 – 5 years’ experience.

On accepting the national award, Sauce Director Liane Sayer-Roberts said the accolade belonged to the people who make Sauce.

“It has been an absolute privilege to build Sauce from the ground up and I am humbled to have such a talented team of practitioners who share my passion for rural and regional Australia and who are committed to producing exceptional results for our clients,” she said.

“This award belongs not to me, but to everyone who makes Sauce – our wonderful clients, our talented partners and suppliers, and most importantly, our amazing team in Leeton, Sydney, Canberra and Melbourne.”

Liane also acknowledged fellow local Leeton PR consultancy Lynsey Reilly Communications, who was highly commended in the Australian Micro Consultancy of the Year award.
“What a wonderful outcome for the town of Leeton to have two agencies recognised at the highest level in Australia in what is known as one of the most rigorous industry awards programs of its kind.”

For 40 years the PRIA GTA Awards have set the benchmark for excellence in the public relations sector in Australia. Sauce’s win is the fourth agency of the year accolade for the company in the past two years.